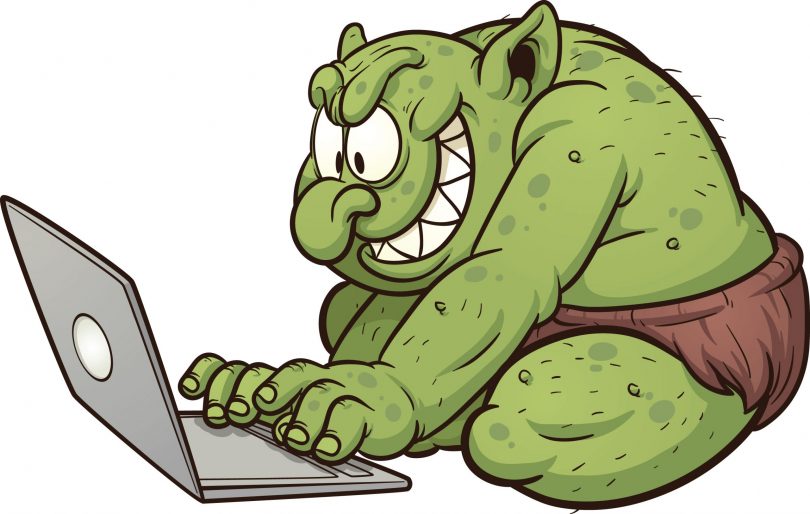 When did you meet your first internet troll? If you haven’t met one yet, count yourself lucky. An internet troll is someone who goes online with the purpose of getting involved in conversations and turning them into all-out battles. The typical troll is fiercely unreasonable, illogical, and antagonistic. He’s a warmonger who gets a sick pleasure out of inciting conflict. Often, the troll is an insecure person who finds his or her sense of worth by breaking other people down. These trolls like to twist your words and make personal attacks. Here are some ways to defeat trolls when you encounter them online.

Call the troll what he / she is. When he shows his true, trollish colors, simply post the line, “Don’t feed the trolls,” or something similar. It lets the troll know that you’re not fooled, and that you won’t be feeding into his negative energy. It also serves as a warning to others on the forum or thread, encouraging them not to let the troll trick them into a pointless, unwinnable argument. After you post your warning line, leave the discussion and don’t look at it again. This is probably the most effective way to keep the troll from getting his claws wedged into your emotional well-being. If the troll is pursuing you on Facebook, block him or her; if he’s chasing you down via email, send his or her messages straight to the trash.

Keep responding to others on the thread and chatting away about the topic under discussion, but don’t respond to the troll. Pretend he isn’t there, and that his remarks don’t even exist. He’ll get frustrated that you’re not paying any attention to him, while you sit comfortably on the moral high ground.

Method 3: Mess with the Troll’s Mind.

Maybe you’re in a mischievous mood and you’d like to have a little fun with the online troll. One way to beat him at his own game is by twisting his statements around like he’s twisting everyone else’s words. Misinterpret everything he says until it seems that the two of you are on the same side. This will drive the troll so crazy that he or she may even leave the thread. At the very least, you’ll have a good laugh.

Heap the troll’s head with ridiculous amounts of praise, like, “You are the wisest, most important, most interesting person in the whole world. How did we ever exist without your wealth of wisdom and knowledge? Oh wise guru, please shower us with your words of gold.” You get the idea. Just have fun with it, and make sure that every comment you post just drips with sarcasm. Again, the goal is to derail the troll’s purpose, which is to make everyone feel misunderstood, angry, hurt, and frustrated.

Above all, don’t try to reason with a troll. Trolls aren’t interested in a healthy, logical debate; they want chaos and conflict instead. If you can’t beat the troll by these methods, report them to the moderator or administrator, turn off your computer or your phone so they can’t touch you, and go enjoy the beautiful world.