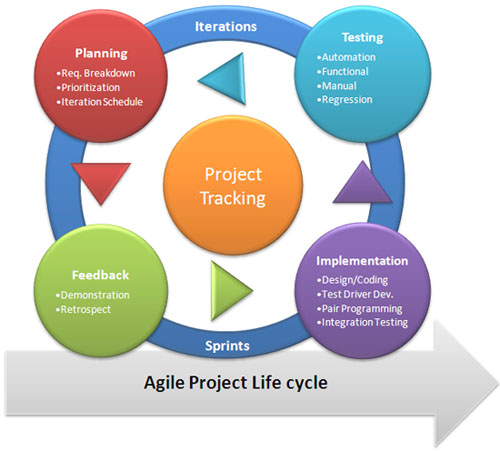 Agile software development is based upon notions of organization and incremental development. Teams and organizations practicing Agile are generally much more ordered, structured and controlled, in addition to being much more informed about the desired of the project owner and the developments of their team members.  Agile itself has produced a number of supplementary methodological practices; four of the most popular / most common being:  Scrum, RUP, RAD, and XP.  Let’s take a look at what defines these four methodologies, shall we?

The 4 most common Agile methodologies

While it’s always a good idea to “think outside the box” when approaching a creative task, this is not always the case.  For example, when working with teams, where more work can be completed which covers a larger spectrum of interest, organization is paramount.  Scrum takes the concept of compartmentalization to its next logical conclusion by allowing individual teams to focus on specific elements / goals of a project while at the same time, routinely coming together to create synergy.

At each “gate”, those involved must meet or exceed what is required in order to progress; this effectively eliminates mistakes in addition to providing forward mobility for a project.

As its name might suggest, RAD is concerned with speedy development of product.  In RAD, great emphasis is placed upon creating a highly functional prototype; in many cases, prototypes are so highly advanced that they need only be tweaked before being released.  User interaction and feedback are also highly encouraged when applying a RAD methodology.

XP is reminiscent of both Scrum and RUD in that it uses a fractional system for measuring progress and allowing further development to continue.  The thing that separates XP from these other methodologies however is its focus toward the desires of customers, or project owners / investors.    In XP-based development, the entire focus of development may be altered given the shifting concerns of ones customer(s).

The AUP is a scaled down and simplified version of the very powerful Rational Unified Process. This particular methodology distinguishes beneath two different types of iteration; those iterations to be deployed to the Quality Assurance/Demo area, and those to be deployed to the production area. This allows for a clear timeline, allowing your employees to know exactly what’s going on and when. Focusing again on simplicity and independence, this is a method that you should seek to adapt to work in your own project environment.

Each of the agile methodologies has its benefits and drawbacks; you will need to assess which particular strategy will work the best for your own team based on your own situation. There are plenty of options out there and it can take a bit of time to discover the best solution. The benefits will more than outweigh that initial research time however, as using agility within the development of your own software or product will help you to see results sooner, keep your staff more satisfied and even maximise your profits.