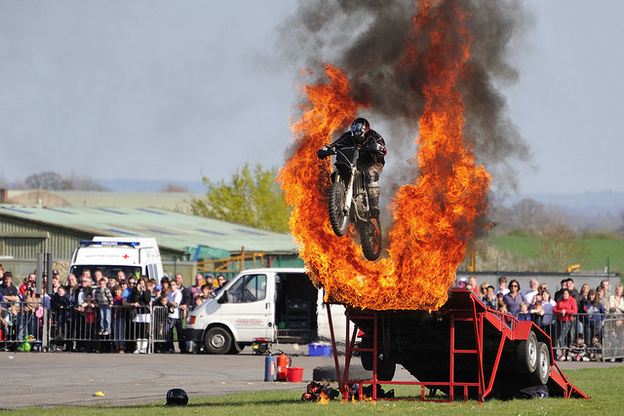 If you’re anything like me, you probably spent a large portion of your childhood wishing you could become a Hollywood stuntman. The reasons for this are many, but for kids, the most prominent one seems to involve the level of danger associated with the job. Most of us realise when reaching adulthood that it’s a really risky thing to do, and so we fall out of love with the idea. Even so, very occasionally this remains a lifelong ambition for some people, so I thought it might be wise for me to release a post today explaining what you need to do to make it in this game. Of course, there are no hard and fast rules, and you can take another route to achieve your goal. Still, the information below this paragraph will highlight one of the simplest.
How do I know so much about this? Well, believe it or not, I have a friend who’s been doing this for years. While the money might be a little unreliable, and you do often have to travel around the world at a minutes notice, he tells me its one of the best jobs he’s ever had. So, if you’re one of those people who think becoming a stuntman is impossible, think again!

It doesn’t matter whether you choose Karate, Judo, Taekwondo or any other kind of martial art, enrolling yourself in a class with definitely benefit you. Not only will you pick up skills that will allow you to fight in a convincing manner, but you’ll also learn how to fall properly, thus limiting the chances of injury. If you don’t like the idea of martial arts, you could simply take up gymnastics as this will present the same results.

There are lots of ways of getting your foot in the door, but the most sensible includes registering with a top agency. You need to get yourself online and take a look at some of the industry leaders. Unless you know a couple of major Hollywood film directors or people who work in the special effects department, this is the only way you’ll get involved.

As with anything else in this world, you’re judged on your abilities when becoming a stuntman, so making an intense demo tape is always going to be a good idea. You could show the agencies your ability to fall from high places, travel down the road hanging onto the bumper of a car, or even getting shot with real ammo. Just remember to wear your bullet proof vest for the last suggestion.

To begin with, you’ll probably have to accept low paid roles in B-movies, but that’s fine. Any work you undertake will give you more experience that can be added to your CV. It will also help you to make more demo tapes to attract interest from larger studios and film companies.

So, now you know how to become a Hollywood stuntman, I wonder how many of you will take a leap of faith and realise your childhood dreams this year?

See you next time!