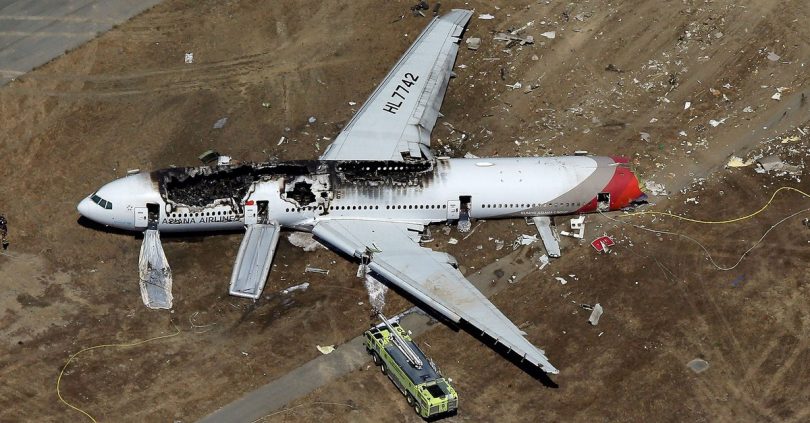 There are few things as utterly terrifying to the modern individual as the thought of finding oneself subjected to a plane crash.  Perhaps it’s the fact that most people are scared of heights mired with the reality that you’re essentially locked inside of a massive metal tube hurtling toward the ground below?  However one reasons the situation out in their own mind, even the most weathered jetsetter will occasionally be subject to the jitters when their airplane falters or encounters some particularly disturbing turbulence.   Statistically speaking of course, plane crashes don’t always end in complete disarray with everyone killed.  The engineering and design associated with the modern jet is nothing short of amazing, with most models being able to effectively glide distances or land safely with only one functioning engine.  Naturally, if you are present during a crash there are some things you can do to improve your chances of survival.  Consider the following…

You know what they say; prevention is the best medicine – which is why you might want to consider wearing specific items before flying.  Specifically, clothing which protects your skin (pants, thicker shirts with long sleeves and of course, sturdy shoes) will aid you both during a crash and afterwards.  Depending on where your plane went down, there might also be harsh weather or other environmental factors to contend with not to mention hazards like broken glass.  Assuming that you and the other survivors are somehow left stranded in a remote location, you’ll also be glad you wore something more protective as it will prevent routine cuts and scrapes which might lead to run-of-the-mill infections.

Most notably, you’ll also want to be extremely mindful of your environment, taking not of specific distances to emergency exits as well as mentally marking the location(s) of other critical assets and personnel.  Needless to say, post-crash there will be lots of confusion and perhaps even a complete absence of light – this is where your intimate knowledge of exits and entryways will become critical (not just for yourself, but perhaps others as well).  Furthermore, do listen to the token pre-flight instructions as they will be tailored to your aircraft and will provide the first and most important line of defense to help you survive a crash.

It should also go without saying that an inebriated person doesn’t make a particularly alert survivor.  In other words, if you know for a fact that your flight is going to be encountering some heavy turbulence then perhaps it’s best if you give the alcohol consumption a rest?  Naturally, the same rules apply for those who imbibe any other form of controlled substance.  According to many analysts, the first minute and a half is critical when it comes to plane crash survival, and if you’re able to make it out before then you’re probably in the clear.

Last, but certainly not least, there’s fire and water.  With a hard landing or crash there’s a good chance that a fire might break out, which is why you should stay as low as possible to avoid any toxic fumes.  Likewise, if your plane goes down over water you’ll want to calmly and swiftly make way for the nearest emergency exist, making sure to have previously placed your life preserver around your body long beforehand.  Of course don’t attempt to inflate the vest until after you’ve made it out of the cabin, otherwise you might find yourself restricted.