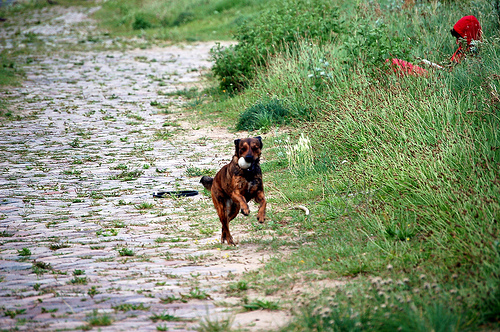 Some dogs can naturally play too roughly. After all, it’s what being a dog is about, right? Dogs love to play to explore the world and socialise, so in most cases it’s normal, healthy, and safe. However, if for whatever reason the roughhousing went too far, it could become very dangerous. Play bites are common, as are lunges, swipes, and barking while playing. This will usually be done in a gentle way, but playful activities could possibly take a turn for the worst if you aren’t careful. Read on to stop your dog from playing too rough:

Make Sure You Discourage Rough Behaviour

Sometimes people can encourage dogs to play rough, even though they probably don’t know they’re doing it. This can be the case if you use your hands, arms, or legs while playing with the dog. Make sure that you behave in a gentle way as you play with your dog, and use tough dog toys to play with them, not your arms or legs. Sometimes smaller dogs can learn to play roughly from larger dogs or even another person, so if you think this could be the case it’s probably best if you stop meetings between the two.

To stop rough play early on in puppies, make sure you don’t play dominance style games with them such as tug of war. You should also make it perfectly clear that the toys are yours, and it’s you who decides what your dog can play with and when. If a dog has lots of toys, it might start to hoard them in a place it thinks is safe in order to feel powerful.

Tell Your Dog To Cool Off

Playing can sometimes make dogs feel stressed out, especially if they’ve been playing rough with another dog. The best thing to do is firmly tell them to lie down for about 5-10 minutes to help them regroup.

Take Your Dog To Be Spayed or Neutered

For dogs, playing is all about having dominance over another dog, a person, or toys. If you spay or neuter your dog, this can calm down some of these urges and make them easier to manage. It’s definitely something to consider if your dog shows a lot of aggression towards people or animals!

As an owner, it can be hard at times to know the difference between your dog’s version of “playing” and a violent encounter. You should break anything like this up before it even begins, especially if there’s barking or growling. You need to be totally aware of your dog’s body language and how it reacts in certain situations so you can do this effectively. You should especially take care if a larger dog is playing with a smaller dog, as the smaller dog could become injured even in gentle play.

Playing is healthy for dogs and a form of socialising for them, so you should encourage it. However, you should always monitor play sessions and make sure they aren’t getting too intense. If your dog’s behaviour changes suddenly, or you think there’s a behavioural problem and you don’t know what to do, consult your vet.