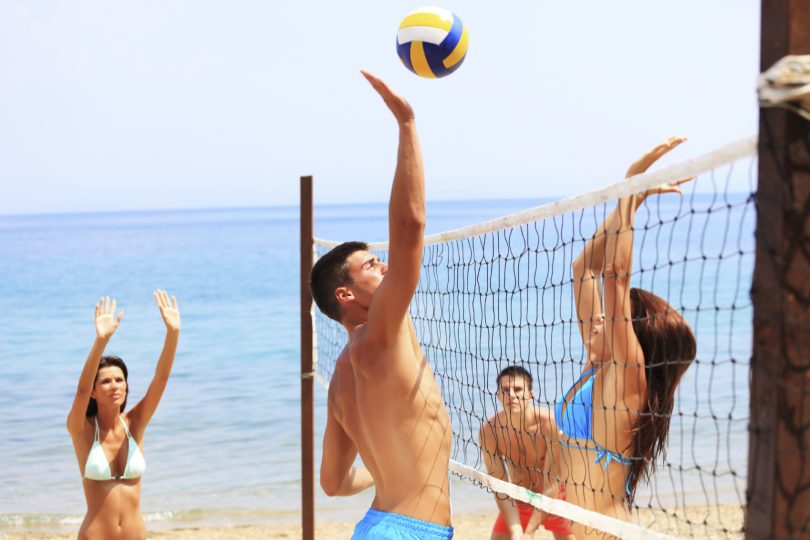 Volleyball is an often overlooked sport which deserves more attention than it gets.  Typically featuring two teams (containing six players each), the game is more or less outwardly identical to tennis in that you serve the ball to the team on the other side of the net and points are scored when the other players aren’t able to send it back.  Of course the fully established rules of volleyball are rather extensive and may include the use of specialized formations, but the core of the game remains largely the same.  In this article we’re going to cover the basics of volleyball – a primer, if you will, for new players…

First off, you’re going to want to create three rows of players spanning the front (near the net), the middle and the rear.  Each position carries with it a special duty of sorts.  For instance, the players in the corners tend to serve the ball, those in the middle tend to help set up spikes, while the players in front are generally asked to deliver spikes.  Naturally, these roles can change, but this is more or less the standard way of looking at the layout of a team.  It should also be noted that everyone should rotate (clockwise) in order to ensure that everyone has had a chance to play every position on the court (in accordance with providing for a new server on each turn and so forth).

When serving, the player (on the right side of the back court area) must send the ball over the net to the other team (and it can touch the net, that’s legal according to most rule books).  When serving, you are to stand behind the back line of the court.

Once the ball is over the net it’s up to the members of the opposing team to return it back across the net.  Ideally, you want to have an organized team that’s capable of setting up a spike (a forceful strike which is meant to catch the other team off-guard and unable to react).  Typically speaking, after being served a ball a good team will have one player bump the ball, slowing down its motion and trajectory, another coming from below to lob the ball slowly toward the net in an arch, and finally the last player delivering a crushing spike.  At any rate, the ball must not hit the ground or go out of bounds, in fact, it needs to remain in motion at all times to stay in play.

Points are scored when the other team faults.  Naturally, before you start playing you must agree on a threshold, the typical amount being set at around 25 points.  Additionally, games are usually divided into three matches – first to capture two wins is the victor.  Aside from learning the rules it’s vitally important that you learn to serve, bump, set up and spike the ball, and each move features its own unique stance to familiarize yourself with.